Methanol as a hydrogen-carrier – to green transitions

Growing recognition of the threat posed by man-made climate change has spurred government institutions, industry, and science to find clean fuels to power economic activity. Government legislation on emissions has created challenges for those who need to comply, opening new markets and opportunities for alternative fuels, including methanol.

In 2018, the European Parliament, Council and Commission agreed on the Renewable Energy Directive II (RED II), requiring 14% renewable energy to be used in transport by 2030. In total, 66 countries have put targets or mandates in place. Besides the EU-27, 14 countries in the Americas, 12 countries in Asia Pacific, 11 in Africa and 2 in non-EU countries in Europe all have implemented biofuels adoption policies, some as high as 15 to 27%2 *.

In this context, methanol has risen as a clean alternative to fossil fuels, offering a clear pathway to drastically cutting emissions in power generation, overland transportation, shipping, and industry. Methanol is an outstanding energy delivery mechanism and may therefore be considered as a unique storage medium for sustainable energy. As a result, methanol has become one of the largest commodities and methanol demand is expected to continue to grow. There is a well-established worldwide production with methanol plants in Asia, North and South America, Europe, Africa, and Middle East. Worldwide, over 90 methanol plants have a combined yearly production capacity of about 110 million metric tons (almost 36.6 billion gallons or 138 billion litres). According to renewable methanol provider Nordic Green, the global methanol market exceeds 100 million tons in 2020. The first year that the 100 million tons (125 million m3) barrier was broken**.

The fuel applied for Serene fuel cells is a pre-mix consisting of 60 % methanol and 40 % demineralized and de-ionized water (on a volume basis). This mixture provides many advantages as an energy-carrier, since it is less flammable than pure methanol and, therefore cheaper to transport. Moreover, there is no water condenser needed, which again means lower weight, higher efficiency, and lower cost compared to pure methanol.

The cleanest methanol variant is defined as green or renewable methanol: Bio-methanol or  E-methanol (see illustration below on this page). Compared to conventional fuels, renewable methanol cuts carbon dioxide emissions by up to 95%, reduces nitrogen oxide emissions by up to 80%, and eliminates sulphur oxide and particulate matter emissions. Both methanols are available by Advent Technologies A/S.

The pre-mixture by Advent Technologies A/S provides many advantages, since it is less flammable (fire class II) than pure methanol and, therefore cheaper to transport. Moreover, there is no water condenser needed, which again means lower weight resulting in higher efficiency.

It can be distributed in the same way such as gasoline and diesel and thus possible to ship by land/ sea and air – available in 20 and 1000 Liters containers in European countries and worldwide.

We offer also green (Bio-methanol) and e-methanols. Pls. contact our sales for for further inquiries via contact form here

Methanol as a carrier to hydrogen poses key advantages to the simplicity of storage (handling and logistics) plus safety. Within the range of green methanols as carrier to hydrogen, various types of exist, their ability to reduce CO2 vary.

The world as we know it today utilizes many different energy carriers. Gasses, liquids or solid, depending on the availability and application requirements. Reducing the CO2 emissions requires a substantiality amount of renewable energy from solar and wind – this will be electrical energy, and will be fluctuating on hour-hour, day-day, and season-season basis. The energy cannot be stored in the electrical energy grid, nor can we expect to transport only in the electrical power lines. To utilize the energy, and to become carbon neutral, we must be able to store and distribute huge amount of energies from sector to sector. This is often referred to as Power-To-X.

Looking into sustainable energy carriers, some are more applicable – methanol is one of the most promising carriers, as it can be made from bio mass and renewable sources with low losses.  It is easy and safe to handle and store, and logistics are similar to what we know today from diesel and gasoline. 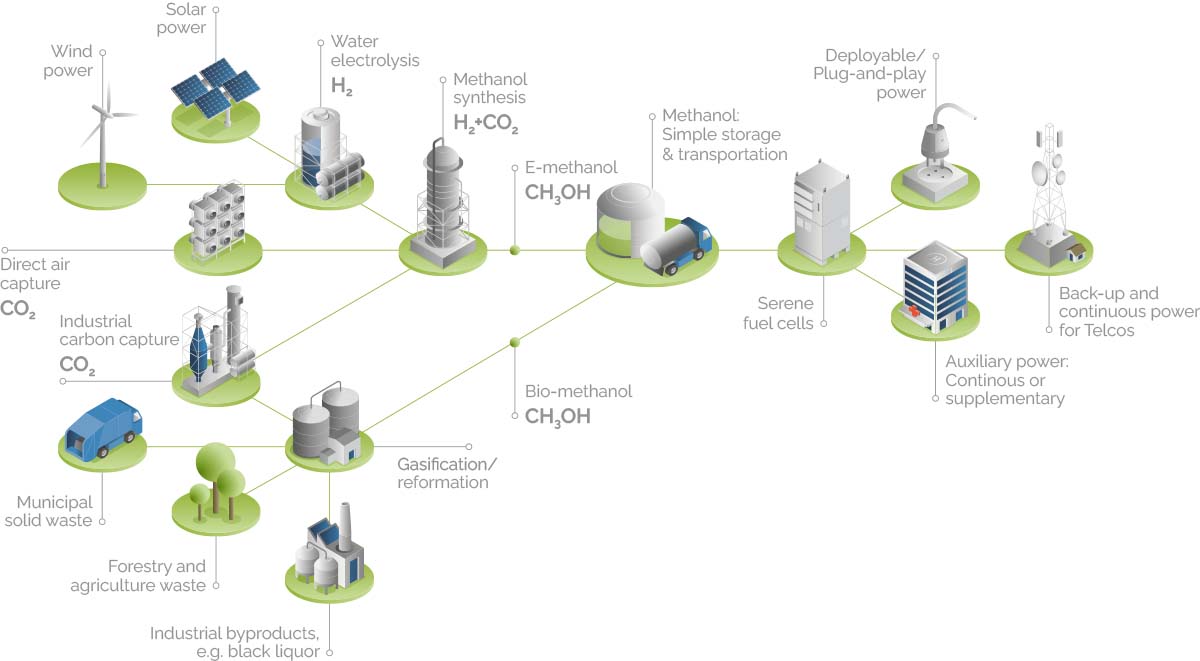 The vision of methanol is illustrated here. From the left the green energy sources for methanol production is shown. In the production of methanol, hydrogen and carbon are required, either separated molecules or as longer hydro carbon chains. The sources can be either hydrogen from water electrolysis, combined with CO2 from either industrial carbon capture, or direct air carbon capture, or bio-mass.

The methanol can be easily stored and distributed with similar methods as we know from fossil fuels like gasoline or diesel. With the Serene product, applications can be powered directly from methanol, enabling low carbon emissions. The applications ranges from small genset to large industrial installations.

Our Serene fuel cells themselves do not emit CO2. When running on green or e-methanols, Serene fuel cells are a perfect match to world-wide applications, now in need to commerce or continue their green transitions based on sustainable infrastructures with up to 95 per cent or even higher levels of CO2 reductions by implementing our technologies.

Pros and Cons of Methanol*

Use as Fuel and Fuel uses

As Gasoline Additive and Substitute

As a diesel substitute

Download our guide: “Fit for the green transition?” to map your company’s opportunities transitioning to clean power by Advent.

The guide is intended to help you consider and initiate the transition to clean and renewable energy and presenting by Advent a viable catalyst; methanol-based fuel cells for your future, alternative energy practice. 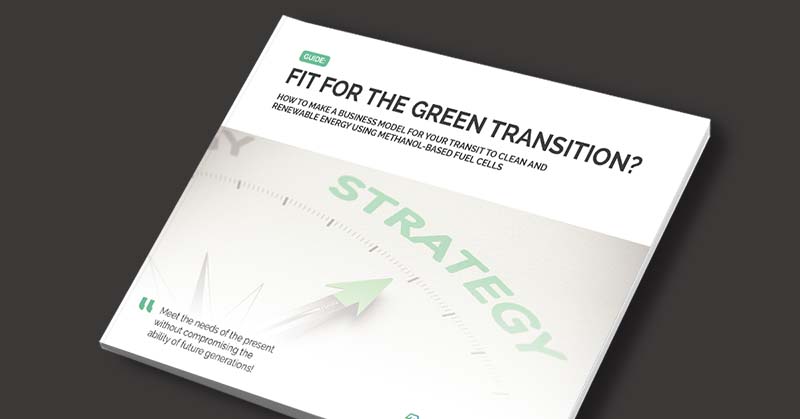