Advent to Launch Next Generation of Methanol Fuel Cells: SereneU

A 4th generation of Advent’s fuel cell units: SereneU is now released. The new generation introduces many advantages, such as longer lifetime, less service and maintenances, and improved total cost of ownership. The product upgrade places Advent fuel cells in a significant state-of the art position for volume market penetration – responding to an increased global demand for sustainable energy, working for the environment and for Advent customers.

Increasingly, enviromental and social sustainability are raising fundamental questions on how we are powerering applications. Cutting down CO2 and particle emmisions are key elements in the climate debate. Advent methanol based systems are drastically cutting down emissions in power generation applications. As a stand-alone or in a hybrid configuration with direct solar and wind energy, Advent’s methanol fuel cells units, can make us reach mutual global ambition of cutting down CO2 emissions. Methanol can be produced by renewable sources, is easy to store and handle and has become one of the largest commodities, with increasing establishment of worldwide plants in all continents.

Methanol fuel cell units by Advent have the option to interconnect with multiple units resulting in power systems and solutions for larger power demands. In category of power supply, Advent fuel cells is a reliable source of on-demand power generation for critical communication networks such as commercial telecom and security etc. Fuel cells by Advent can deliver DC power directly, without power loss from additional converters, providing a highly efficient energy supply. Different type of battery charging algorithms are integrated in the power electronics so that it can be supported and configured for different battery types, or hybrid electrical systems. Another advantage of integrated electronics is a closer integration with the fuel cell system itself and control of this which provides some additional options for optimization of operation, reliability, maintenance and diagnostics/state-of-health monitoring. All in all, this makes handling easy and reduces fuel consumption on site. As a low maintenance power technology, the unit is equally ideal for critical backup power, temporary or continuous 24/7. It works both in off-grid applications and as back-up for in grid applications.

Ever since 2006, Advent has been working to lift each variable in its fuel cells and systems to benefice sustainable use cases. As the company now launches its 4th generation, the overall goal has been to lower total cost of ownership to customers. 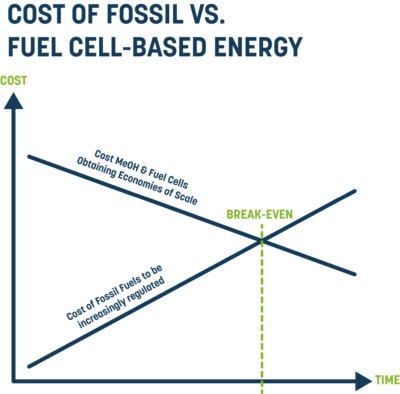 The 4th generation of fuel cells to be released by Advent, SereneU, introduces improvements in terms of quality and a lifetime extension which in turn will minimize maintenance and leverage profitability to customers. Main parts of the fuel cell units are stacks and reformer and both components, developed and produced by Advent, have been reinforced, causing the overall lifetime to be increased by more than 30%. Moreover, SereneU embeds a unit swap technology securing no or short downtime during power failures and with an extension of temperature windows of operation to -20 to 50C, SereneU is fit for operation in most regions – outdoor as well as indoor.

Commercial Manager, Morten Thomsen, from Advent is looking forward to introducing the market to this latest generation of methanol-based fuel cells:

We see markets responding positively to fuel cells within many application areas in recent years, particularly within telecommunications, lately a large-scale deployment by Smart Communications Inc. but also residential and construction industries respond with increased demands where we have entered a number of partnerships lately. Our customers demand not only sustainable solutions but also reliable and smart solutions that are price competitive. No doubt, price is a critical factor to industries as they transit to green energies and with our new generation lowering total cost of ownership, we are one step closer to that break-even bound to come, if not already here.

As it is the case with renewables, the increased demands for clean power in itself has a positive impact on economies of scale meaning that Advent can reduce prices its fuel cells as productions are scaled up. Moreover, the regulations on harmful emissions will ultimately have an impact on the industries and practice turning them towards investment in sustainable energies like methanol-based fuel cells by Advent. No doubt cost aspect is a major driver for power solutions today, but as sustainable targets and legislation progresses, the transit to sustainable solutions will not only be cost-driven.

Reaching a Significant Milestone with the Development of SereneU G4

The 4th generation of SereneU fuel cells has been in the development for a little more than two years and has involved all competences in the development team at Advent including material physics to mechanics to electronics to software and special competences like flow simulation and safety.  According to R&D Director from Advent, Morten Hougaard Sørensen, product development is an effort never compromising on quality, on the contrary:

Quality assurance is perhaps the most challenging exercise for new technologies – many companies in the fuel cell business have failed. At Advent, we extensively test, validate and qualify our components, assembly processes, and products. And throughout a decade now including four product generations, we have improved the design and demonstrated its quality and reliability both in our local test center, at our partners’ and at customers’ sites. We qualify our fuel cells and systems through a broad range of tests according to international standards, covering among others: durability tests, environmental testing, reliability and stress testing plus functional safety tests. And constantly, we manage to push the boundaries of our fuel cell technologies in response to customer requirements. 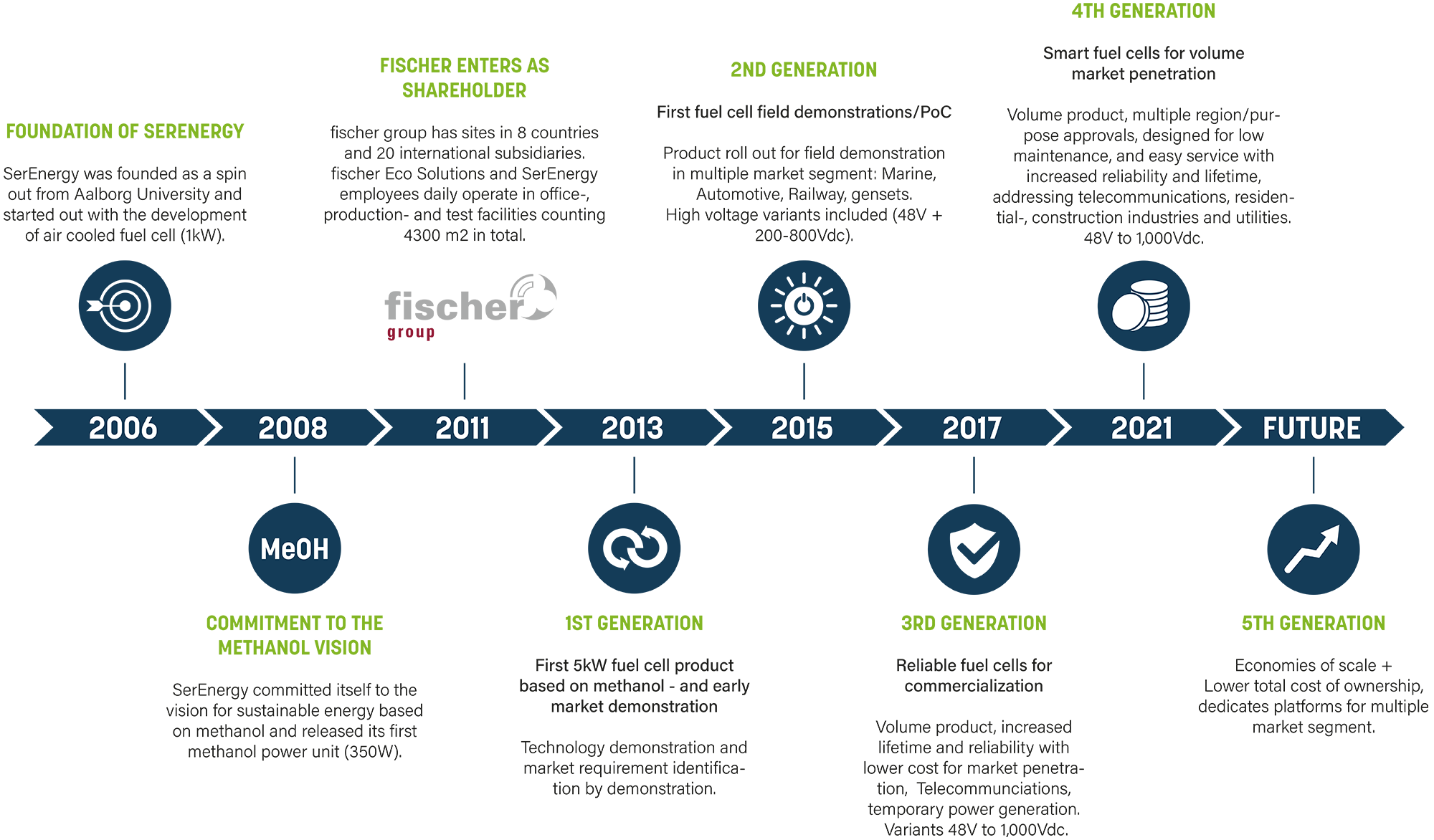 A fuel cell is a device that generates electricity through an electrochemical reaction, not combustion. In a fuel cell, hydrogen and oxygen are combined to generate electricity, heat, and water. Fuel cells are used today in a range of applications, from providing power to homes and businesses, keeping critical facilities like hospitals, grocery stores, and critical communications up and running, and moving a variety of vehicles and last but not least for critical –, backup –, auxiliary – and primary power. Hybrid solutions merging wind- or solar energy sources with fuel cells represent to ultimate green and sustainable solution.

The fuel cell is a clean, efficient, reliable, and low noise source of power. Fuel cells do not need to be periodically recharged like batteries, but instead continue to produce electricity as long as a fuel source is provided. Unlike combustion-based power generation, stationary fuel cells provide virtually emission-free power. They do not produce particulate pollutants or unburned hydrocarbons. They emit less carbon dioxide than other, less efficient technologies, and when using fuel generated from renewable sources such as biomass, fuel cells are completely carbon neutral. 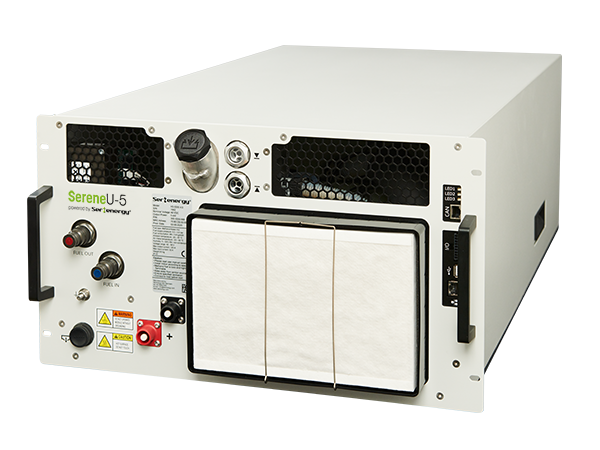 Fit for the green transit?

Download our guide: “Fit for the green transit?” to map your company’s opportunities transitioning to clean power by Advent.

The guide is intended to help you consider and initiate the transition to clean and renewable energy and presenting by Advent a viable catalyst; methanol-based fuel cells for your future, alternative energy practice. 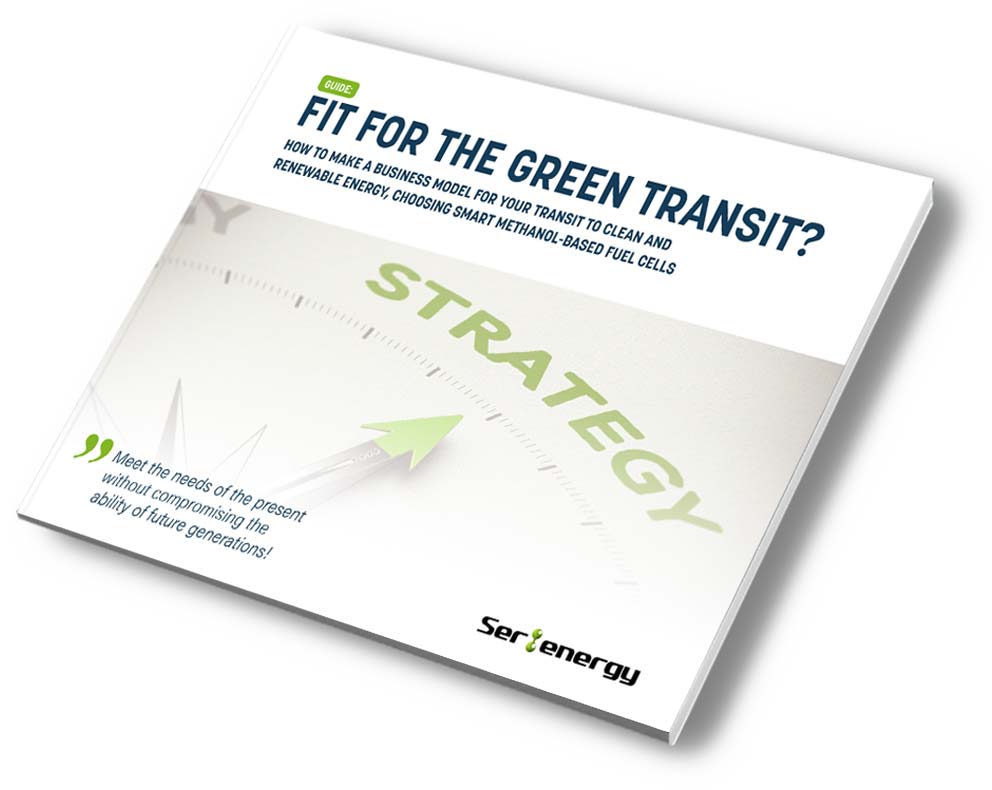